This is the official and required text book for our Citizen Ninja training class, but it is available to all CFFS members. If you want to learn how to communicate effectively by exercising your First Amendment rights, then this is the book you  want to have! It’s available for a donation of $20 and postage is included. NOTE: We can only deliver to U.S. addresses.

If you intend to take training online or in-person, you will also want to purchase the Citizen Ninja Workbook as well.

Citizen Ninja stand up to power in pursuit of freedom, truth, and justice. Citizen Ninjas speak up; they don’t wait for others to speak for them. Citizen Ninjas are prepared, discerning, self-reliant and assertive. They step out of their comfort zone to nimbly challenge powerful entities that disenfranchise the public and reduce citizen power.

Citizen Ninjas respond to community issues and actively engage City Hall to make a difference. They pay attention to government business and actively direct elected public servants to create policies that benefit the interests of the whole community. They are the activists who demand government transparency and are the watchdogs who speak out when there is corruption or ethical wrongdoing.

Citizen Ninjas are passionate. They know that their civic participation places them in a better position of influence when new regulations, mandates, and ordinances are enacted.

Citizen Ninjas are activists who strive to preserve the power of self-government—a representative republic that is of the people, by the people, and for the people. They actively engage in the public square rather than passively allowing government agencies to make decisions on their behalf. While being passionate, Citizen Ninjas avoid throwing vitriolic word bombs like “fascist pig” or “baby killer” and instead build trust, find common ground, and work toward constructive solutions.

Showing up at a city council meeting, a public workshop, a rally, or a town hall meeting to express dissatisfaction is the right thing to do, but being effective takes more than good intentions. Citizen Ninjas are smarter, more cunning and strategically savvy in approaching highly organized government agencies, powerful corporations and established non-governmental organizations they partner with.

In Citizen Ninja author Baker presents a peaceful approach to political activism espousing an exchange of ideas, robust debate, respect, and tolerance as opposed to tactics which promote violence, hatred, prejudice, and bullying. Every two years, many Americans get busy and campaign for the candidate of their choice. Activity ranges from simply speaking to friends and family about their choices, to donating money, walking precincts, and voting. Then after the election the majority go back to working, playing, and raising families.

Citizen Ninja explores the importance of continuing participation in government after elections. Baker stresses that We the People keep informed about what is going on in local government agencies—city council, school board, county board of supervisors, and metropolitan planning organizations, to seek opportunities for civic participation. The book shows that we are the boss, politicians are the employees who require supervision and guidance and are more effective when having our support and attention. When we are part of the process, we are part of the solution.

In Citizen Ninja readers learn how to speak up in public without being scared or intimidated. Citizen Ninja shows that to be effective in civil discourse, we must transform the way we think about activism. Standing up to power is not about acting out in anger, condoning violence, or relying on mean-spirited tactics. Rather it is about honesty, building trust, treating others with respect, working towards constructive solutions, and effective communication.

With practice, Citizen Ninja readers will master skills that enable them to respond intelligently rather than to reacting to stimulation or provocation. These skills include how to seek opportunities for engagement, assess a setting, ask a question, discern a person’s knowledge on an issue, neutralize a bully, and more! 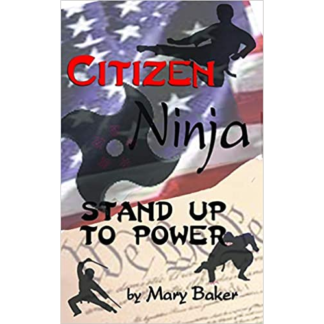 You're viewing: Citizen Ninja: Stand Up to Power Paperback $20.00
Add to cart